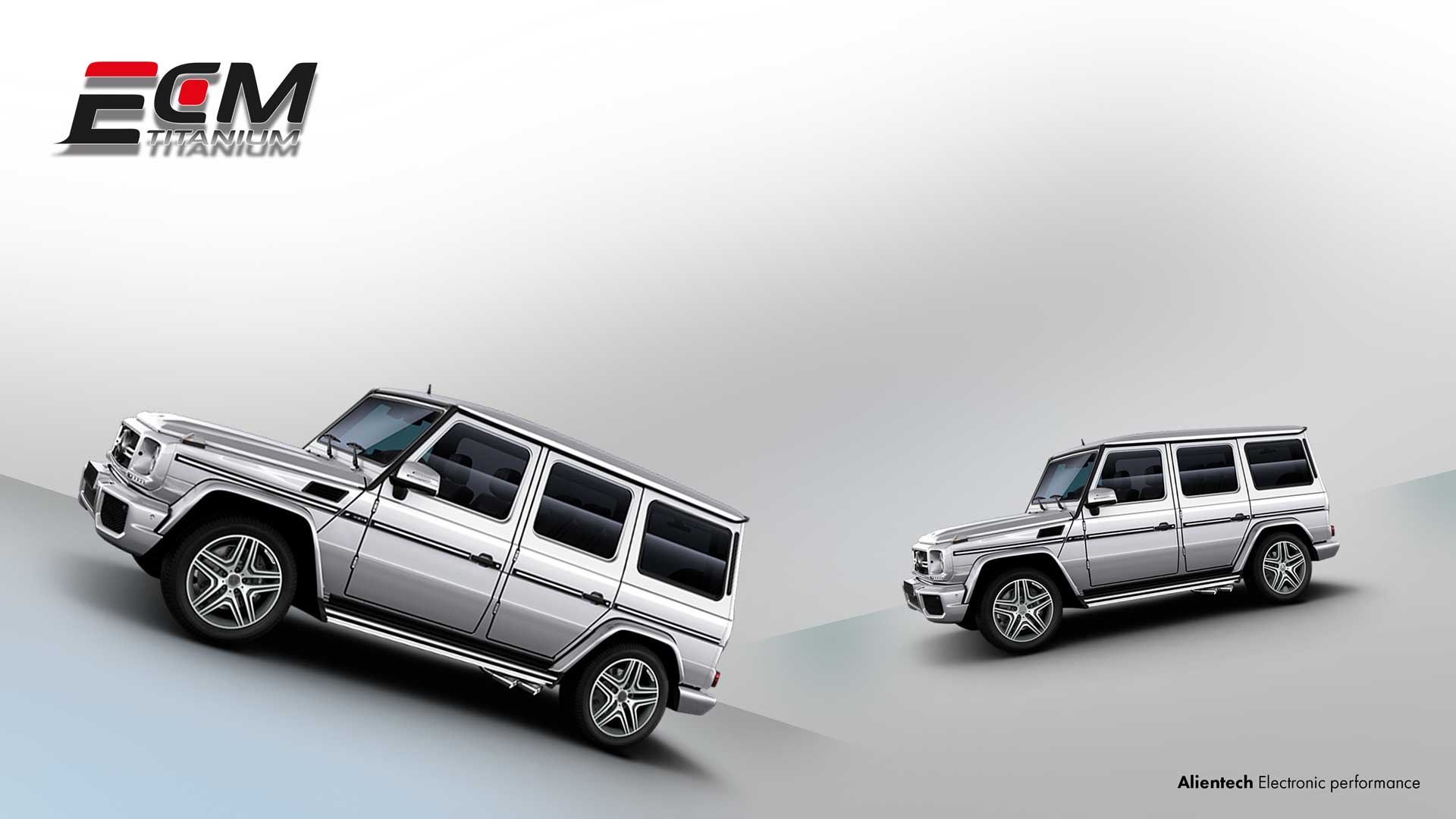 Today we focus on a Mercedes-Benz G Class with a 5.5L 32v V8 Turbo petrol engine supporting a Bosch MED17.7.5.

The G Class is an off-road\SUV that has made history from 1979 and still nowadays is present in the market of new cars with the W463 series, a vehicle totally re-designed and inspired to its more “sporty sisters” like the Mercedes SLS. The design changed its off-road approach to a more sportive appeal, thanks to its set-up, the 7 gear G TRONIC automatic transmission and its four-wheel-drive system with possibility to activate or deactivate the differential.

Here are some features of the G Class:

Composition of the chassis: The G Class does not bend and not even breaks. Thanks to its solid base built with side members and cross members resistant to torsion and its composition made of steel plates of the thickness between the 3 and 4 mm, the chassis guarantees stability and perfect grip. The solid structure protects all the gears while facing rough situations. The chassis is powder coated, treated on the surfaces and then painted. All the holes are filled with warm wax, the body undergoes a KTL coating and the floor completely coated with synthetic materials.

Settings of the differential: G Class has three settings to block the differential that can be activated 100% separately: it’s the only system of assistance for the real off-road lovers.

Safety systems and comfort: Last generation ESP ensures better driving stability and safety. The ASR and the ABS improve the driving condition, reducing the distance to stop. This will allow a more fluid drive avoiding the risk of overturning during the bend.

ADAPTIVE BRAKE system: Thanks to some innovations for what concerns the software, it has been possible to add some new features to the ESP system for the hill start and the HOLD mode. To work at its best, the ADAPTIVE BRAKE uses also the information arriving from other security systems like, for example, the setting of the antilock braking system (ABS), the anti-slip regulation (ASR) and the brake assist (BAS). The HOLD feature is activated automatically when you press the brake pedal for a longer time after the vehicles has come to a complete stop, so to prevent the vehicle from unintentional motion without being forced to keep the foot on the brake pedal all the time. The support for the hill start will make the maneuver uphill easier, avoiding the risk of going backwards while switching from the brake pedal to the accelerator pedal. The system of course comes into action when the vehicle is on a certain percentage of slope.

AMG SPEEDSHIFT PLUS 7G-TRONIC automatic transmission: This particular kind of torque converter transmission is exclusively designed for the AMG products by Mercedes. It is also supported by a DIRECT SELECT at the steering wheel allowing the driver to switch among the three modes: "C" (Controlled Efficiency), "S" (Sport) and "M" (Manual), or even setting a cruise control. The double clutching system is automatic so to have a certain dynamism and safety.

4ETS Electronic traction system: this system is controlled by the ECU that working in combination with ESP system and 4MATIC transmission and allows in a targeted manner to brake the wheels that tend to slide distributing the torque to the other driving wheels that still have traction.

This system is used in case of great speed differences between the wheels of the same axle and works almost like a limited slip differential. But the most important difference is that this system is applicable to the rear axle as well as to the front axle, so it has exactly the same behaviour of a limited slip differential but it works in an intelligent way, because the braking pulses sent from the 4ETS can vary according to the vehicle real time speed:

Mechanically, all this is made possible by a driveshaft located at the output of the gearbox that connect the torque converter. The torque converter is connected to two more driveshafts: one for each differential, in order to ensure that the torque is transferred to the wheels that have more traction, allowing to climb up to 80% uphill.

How to find and read the control unit?

With the K-TAG tool and the more common Tricore activation, family 692, plugin 714 we can create a backup of the ECU and modify all the engine parameters

The ECU can be read with direct connection by using:

To read/write the ECU there’s a simple procedure

-    Solder the wire on the pin Boot as shown in the photo:

We will now analyse the driver main maps

The driver for this vehicle with 544CV V8 BiTurbo, that develops 760Nm, consist of 37 maps

This map represents the opening of the throttle valve percentage, according to the airflow measured by the MAF and the volumetric efficiency. We can see that the maximum value doesn’t reach 100%, so we will have a limitation already given by this map. If expressed in %thr, the maximum will be 100% and it will be possible to linearize it with a 3D view.

This map represents the ideal %Air which enter into the engine according to the RPM and the Torque requested from the Driver through the accelerator pedal; from zero up to 100% means that the turbocharger does not supply additional air, above this value means that the turbo works and compress the Air for the intake.

This map represents the maximum air percentage that can be supported by the engine, according to the RPM. As you can see there’s a limitation.

This map represents the calibration of a specific engine for the injection management when the vehicle works into protection mode, in order to protect the catalyst if the exhaust gas temperature is too high, according to the RPM and the percentage of air which enter into the engine.

This map represents the torque that the driver asks through the accelerator pedal based on the RPM and the %Acc (Driver wish). These are ideal values because they exceed the Nm real values that the vehicle can develop.

This map represents the torque that has to follow a specific vehicle, according to the RPM and the %Air which enter into the engine; if the vehicle has a turbocharger, this map could be more than 100%.

This map represents the limitation expressed in RPM which the ECU uses in order to limit the maximum rotation of the engine.