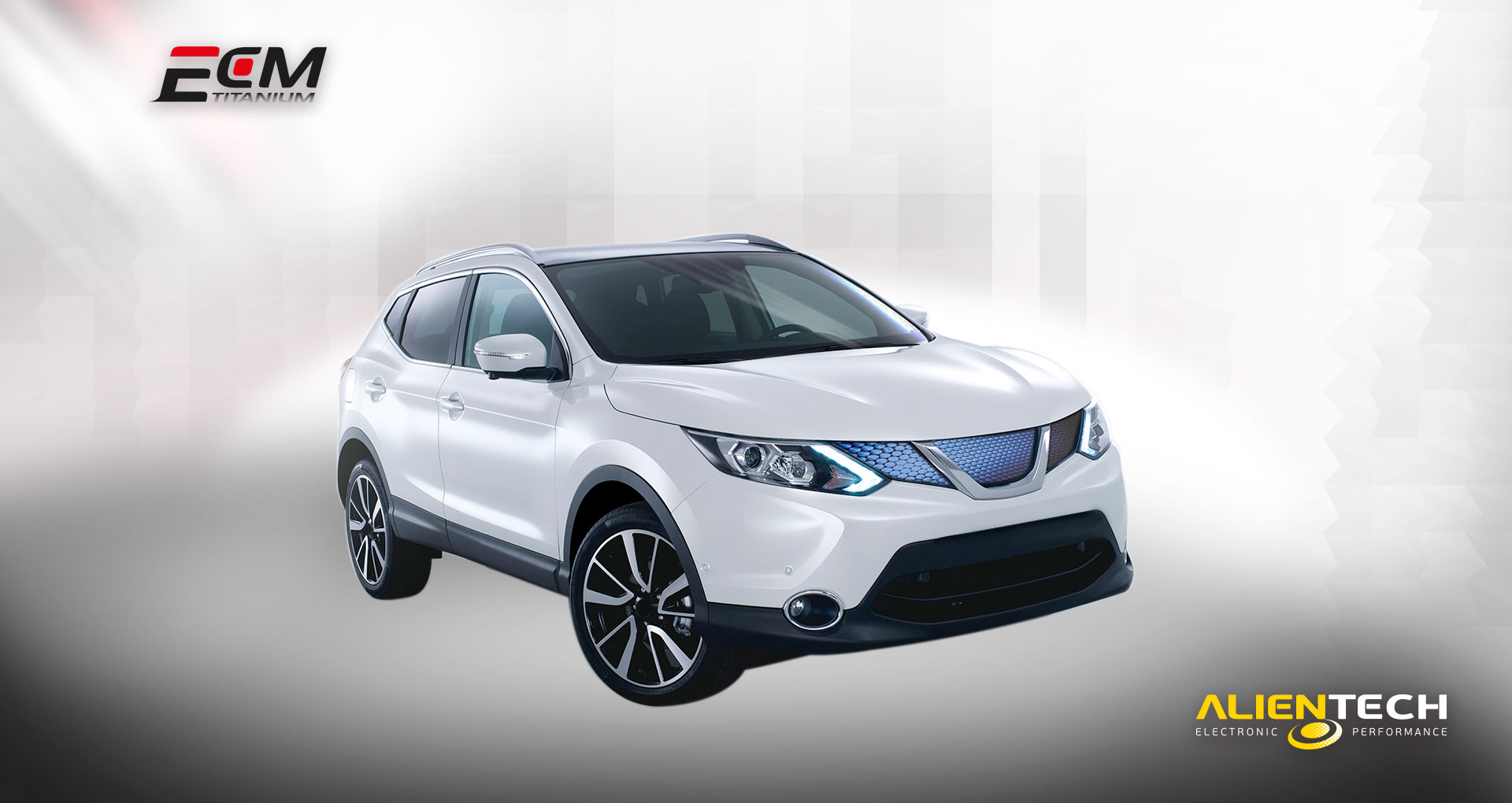 Nissan Qashqai (in Japan called Dualis (デュアリス) is an automobile falling within the crossover category, namely a mixture between a medium-sized sedan and a SUV, which has been made since the end of 2006 by Nissan, in Europe.

A crossover SUV (also called CUV acronym of Crossover Utility Vehicle) or XUV, is a traditional automobile (almost always with Station Wagon bodywork but also a two-volume sedan) featuring the characteristics, mostly aesthetic, of a Sport Utility Vehicle. In some cases, this word is also used to identify some recent models with profiled bodywork, almost like a coupé, but with four or five doors and a raised vehicle body similar to the body of a SUV. An example of this is represented by the BMW X6.

Qashqai was presented at the Paris Motor Show in October 2006; it was entirely developed by the Nissan European Research Centre. The vehicle carries Renault motors (Renault and Nissan are in fact part of the same French-Japanese group) and is built up on a platform developed by the two companies, which will be employed to manufacture the medium-sized SUV by Renault: Keleos.

The Qashqai idea originated in 2004, when Nissan showed the Qashqai concept at Geneva, a medium sized vehicle especially thought for young people. This idea was developed and led to the series Qashqai in short times. Apart from its name, this range shares little in the way of concept. In fact, the style is less hi-tech and more traditionalist. Qashqai is available with both front-wheel drive and all-wheel drive.

The name comes from a nomadic population of Iran and was chosen by Nissan with the idea that who buys this motor car has a nomadic nature.

The second generation of Nissan Qashqai was released in January 2014. With a diesel motor, it is available in the 1.5L dCi 110HP and L dCi 130HP versions. It is also available both with the two-wheel and four-wheel drive (only for 1.6L dCi).

This 1.6L central unit is also combined with other drives and other vehicles of the Renault group (Renault, Nissan and Dacia). Let's see some examples:

The Driver Development department has updated all Ecu EDC17C84 drivers with all necessary maps for perfect mapping.

The R9M motor is a diesel motor that has been produced since 2011 after a joint-venture between the French Automobile Company Renault and the Japanese Nissan.

Manufactured in the assembly lines of the Renault plant in Cléon, the R9M motor is one of the many results of the run-up to the downsizing of many Automobile Companies to face consumptions and the pollution emergency. This trend is also evident in the case of this 1.6L drive unit whose objective is replacing the previous 2.0M9R with the purpose of reducing engine sizes and increasing the specific HP/Litre powers.

The R9M motor has a swept volume of 1598 cm³, a value obtained from the borehole and stroke dimensions equal to 80x79.5 mm. So, it is a shortened-stroke M9R motor (from 90mm to 79.5 mm), because the base for the new engine is just the 2.0 dCi close to retirement. It is also true, despite the distant relationship with the bigger unit, that the components in common between the two drive units are not so many: in fact, it is estimated that the new 1.6 dCi and the previous M9R only share a quarter of the total components (including chain timing system and transmission in place of the toothed belt used for instance in the other Renault dCi, K9K and F9Q). The remaining 75% is totally new. Therefore, this is a square engine which is very modern from the technological point of view, suffice is to say that no less than 30 patents have been registered and techniques and principles from the race world have been introduced.

Among these characteristics the automatic heat regulation system stands out. With a cold engine, it blocks to cooling fluid flow to the head, and in particular to the combustion chambers, which can then easily reach the optimum operating temperature, afterwards opening the water flow to avoid any overheating and maintain the temperature. A quicker achievement of the operating temperature also allows for a decrease of 1% in CO2 emissions because the engine can more rapidly reach greater efficiency.

During cold running, the exhaust gas recirculation system is also on. This factor further contributes to reduce carbon dioxide. But this system differs from usual EGR systems because it is based on recirculation through the turbo compressor and the particulate filter, and then cooling by a specific heat exchanger and route back to the combustion chambers.
Another not inconsiderable aspect is represented by the available Stop&Start device, which further contributes to reduce noxious emissions. In addition, there are at least other two important improvements: on the one hand, the turbulence modulator inside the combustion chamber that enables a better combustion and minor waste; on the other hand, the variable-displacement oil pump that adjusts the lubricant flow to the engine charge.
Finally, we cannot disregard the multiple-jet injection system that allows up to six injections per cycle, granting optimum combustion and no waste.
Thanks to all these improvements, the 1.6 R9M can produce 115 g/km CO2, but with a maximum power of 130 HP at 4000 rev/min and a maximum torque of 320 Nm at 1750 rev/min.
Fitted in the assembly lines of the Renault plant in Cléon, this engine is mounted on:

Already announced during 2014, a twin-turbo version of this engine was introduced for the first time in the beginning of 2015. The boosting diagram is of two-stage type. It includes a small-sized, low-inertia turbo compressor that starts up at the lowest revs, whereas a second bigger-sized, higher-inertia compressor works at higher revs as the first one loses its efficacy. As a result we have a maximum power of 160 HP at 4000 rev/min, with a torque peak equal to 380Nm at 1750 rev/min. On account of such characteristics, this motor has found its place under the engine cowl of:

A slightly more powerful version delivers 165 HP at 4000 rpm/min., whereas the maximum torque does not change. This other version has been fitted in Renault Mégane IV 1.6 dCi Biturbo (since 01/2016).

How to find and read the control unit?

With the K-TAG tool and the more common Tricore activation, family 724, plugin 724 we can create a backup of the ECU and modify all the engine parameters.

The ECU can be read by using a positioning frame (boot pin connected to the adapter or welded to the bump contacts) or via DIRECT CONNECTION.

To read the positioning frame, we need:

To read the ECU with the boot pin connected to the adapter, after opening it carefully, we have to:

- Place the control unit on the 14P800ADBO positioning frame;

- Insert the 14P600KT04 adapter in the corresponding space of the positioning frame and place it on the control unit;

- Weld a wire on the CNF1 pin shown on the picture and insert it on the adapter CNF1 terminal;

- Weld two wires on the two Boot pins shown on the picture and insert them on the adapter BOOTD terminal.

Note: the adapter switch has to be turned to OFF as shown in the figure

Connect the 14P600KT06 cable to the connector of the central unit, observing the diagram shown below:

- Weld a wire on the CNF1 pin shown on the picture and insert it on the adapter CNF1 terminal;

- Place the control unit on the 14P800ADBO positioning frame;

- Insert the 14P600KT04 adapter in the corresponding space of the positioning frame and place it on the control unit.

Note: the adapter switch has to be turned to ON as shown in the figure:

Connect the 14P600KT03 flat cable to the adapter and tool

Connect the 14P600KT06 cable to the connector of the central unit, observing the diagram shown below:

Finally, in case of direct connection, we need:

Then, we'll also have to:

Connect the 14P600KT02 and 14P600KT06 cables to the connector of the central unit, observing the diagram shown below

The driver consists of 39 maps divided into the following categories:

The axis of the Nm reaches up to 352 Nm but the car has only 320Nm, so the ECU will read up to the fourth last column

Maps that regulate the rail pressure depending on the motor revolutions and torque. They reach 1600 bar at the most

This map limits the rail pressure, it reaches the 1700 bar. It operates depending on the RPM and the fuel temperature

This expresses the maximum torque in Nm that the motor can deliver during standard conditions. Values are lightly higher (about 30 Nm) because they are inclusive of the lost torque

The absolute maximum pressure you can get with the original file is 2690 hPa (about 2.6 bar). As in many Bosch ECU units the turbo pressure depends on the motor RPM and torque

Then we have a limiter of turbo pressure that reaches 27400hPA (about 2.7 bar) which also depends on the motor RPM and the atmospheric pressure (hPA APS)

Finally we have one of the turbo limiters that reaches 2700hPA (about 2.7 bar) which also depends on the motor RPM and the fuel quantity injected (mg/Stk F)